Free shipping on orders of *10lbs or more! - We ship within Canada only.

“Golden Nuggets” is the perfect name for this Indian coffee. You might find it a bit exotic. But if you like the Blue Java and the Malabar AA Monsooned, you will certainly appreciate this one.

Let yourself be enveloped in dizzying smoothness! Spicy and luxuriously rich, this rare Arabica is the best of what India has to offer. The beans of the Mysore Golden Nuggets, processed while damp, are slightly exposed to the rain and winds of the monsoon, just enough to give them their distinctive flavour!

Each sip is smooth and spicy, with a light body and fragrant aromas. You will surely perceive its palette of notes, from fresh fruit to dried fruits. This coffee is smooth without loosing its body and has little to no bitterness. You might even distinguish notes of peaches, chocolate and pepper.

A wonderfully balanced cup, offering a rich body and bold flavours. Will you let yourself be tempted? 454g (1 lb)

The India Mysore Golden Nuggets Extra Bold has a fascinating history! The province of Mysore is in the south-western region of India and was the richest gold mining region of the country in the 19th century. Near the end of the 1800s, miners were looking for coal and to their surprise, found gold instead!

Legend has it that coffee arrived in India thanks to one man: Baba Budan, a Muslim pilgrim who “might have smuggled” coffee seeds from Yemen and planted them in his native region of Mysore, at the very place where miners later found the gold. The coffee trees prospered and produced beans much bigger than other coffees from the region, thus earning the nickname “Golden Nuggets”.

The term “Nuggets” is a testimony to its comparison to gold (or at least to the abundance of its place of origin), whereas “Extra Bold” talks of the size of the bean. The Mysore Nuggets Extra Bold is a subtle and tempting coffee for aficionados. It reveals itself as a superior coffee and as such, marvellously represents the quality of Indian coffees. It is cultivated in the now famous Baba Budan mountain range. Coffees from this region give a little more acidity and bite to the cup, which results in a luxuriously rich beverage with mocha undertones that makes for an excellent espresso.

The coffee trees are shade grown with a fertilization of the soil and the trees that is environmentally responsible, thus the UTZ certification. The beans are big, even-sized and of a bluish green colour. They are processed while damp (excellent for crema) and exposed to the monsoon winds, much like the Malabar AA Monsooned, which give them a very distinctive taste. In the cup, we find a medium bodied coffee with good acidity, a slightly spicy taste and fragrant aromas.

Those of you who like the Blue Java and the Monsooned will certainly appreciate this one. 454 g (1 lb)

Only logged in customers who have purchased this product may leave a review. 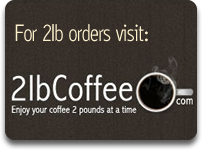